While there’s no instruction manual for how to choose a cat, there’s likely a breed out there that best fits your current habits and lifestyle. Our Clemmons veterinarians highlight 6 breeds known for being content indoor companions.

The answer to this question depends on the personality, physical attributes and other characteristics you're looking for in your feline companion. Cats are as unique as their humans; while some are playful attention seekers, others are placid snoozers. Here are some breeds amiable to a life indoors.

A good choice for apartment dwellers seeking a feline friend, Ragdoll cats are large, long-bodied and strikingly beautiful, with long, silky coats (which also have a high tendency to shed).

Personality-wise, they are loving, sweet, and always up for cuddles. They often greet their people when they arrive home and seem to pick up tricks easily with positive reinforcement.

This powerful, medium-to-large-sized breed is known for being round and thick. Originally bred to keep rodents from invading their masters’ barn and house, they play well by themselves and are a good choice for single people provided they get enough exercise and interaction from their owner.

Note that it’s important to brush your British Shorthair daily, as they tend to grow thick, dense coats in the winter, which shed with seasonal changes.

Named for their unusual folded ears, Scottish Folds are known for being active mousers who are also playful, expressive and sensitive. One of the first things you’ll notice are their striking, orange-yellow colored eyes.

They crave attention, companionship (even that of another cat), and time around people so are perhaps not the best choice if you’re out of the house for long periods. Bonus: they are very kid-friendly.

These acrobatic, golden-eyed felines are outgoing athletes who will show off their athletic skills, provide hours of cuddles, and keep up their end of a conversation in equal measure. They shed less than some other breeds and are easy to groom with only weekly brushing requirements.

This loyal, relaxed and fun-loving breed is known as the pixie of the cat world - mischievous felines with large eyes, high-set cheekbones, slender bodies, and long legs. They are a natural best friend and playmate if you’ve got young ones at home.

Kittens at heart, they are intelligent, active, and need stimulation such as playing with puzzle toys that offer treats as a reward or learning tricks.

You’ll often see a Himalayan exhibit kitten-like bursts of energy - their antics can have them snoozing in a sliver of sunlight, then suddenly up and running through the living room, on to their next adventure. Great companions, provided their owners are attentive to nutrition and give them enough exercise and interaction.

Wondering which cat breed is best for you? Contact our Clemmons animal clinic today for advice. 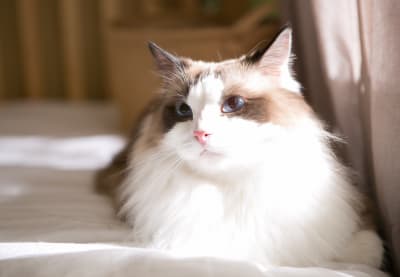 Looking for a vet in
Clemmons?

Is your cat coughing, sneezing and wheezing instead of contentedly purring? Cat coughs are a sign that something is irritating your feline friend's lungs, airway or throat. Today, our Clemmons vets share some common causes of cat coughs and what to do.

What To Do About Your Dog's Stinky Breath

Do you avoid getting close to your pup because their stinky breath is unbearable? Bad breath is common in dogs — especially in senior dogs — and can be a sign of a serious health issue. Our Clemmons vets explain some causes of dog bad breath and how you can help to treat or even prevent it.

Why should I enrol my pet in a Wellness Plan?

If your veterinary clinic offers Pet Wellness Plans you may be curious as to how these plans work and whether they are worth signing up for. Today, our Clemmons vets share 4 benefits to consider when deciding whether a Pet Wellness Plan is right for you and your pet.

Dog Acupuncture & The Conditions It Can Treat

Our Clemmons vets know that if your pet is suffering from a health issue you will want to do all you can to help them feel better. Pet acupuncture can be a noninvasive way to help improve your pet's rehabilitation. Here's a bit about how acupuncture for dogs works and when it can be used.

Signs of Pain in Cats & How to Help

To provide your cat with all the care they need to live a long and healthy life, it's important to be able to spot the signs of pain early and know what to do. Below, our Clemmons vets offer some advice on how to tell if your cat is in pain, and what you can do to help.

Looking for a vet in Clemmons? Get in touch today!

We are always thrilled to welcome new patients into our veterinary family, so contact our office today to book your first appointment with our team.