Although pancreatic cancer is relatively rare in dogs it's important for owners to know the symptoms so that treatment can begin early to try and prevent or limit the spread of this disease. Today our Clemmons vets explain the types of pancreatic cancer seen in dogs.

2 Roles of Your Dog's Pancreas

Your pup's pancreas is located near the start of your dog's small intestine and performs two essential functions.

Symptoms of Pancreatic Cancer in Dogs

If your dog is diagnosed as having a pancreatic tumor it means that the cells within a specific part of your pup's pancreas are overproducing (reproducing excessively). As with most tumors in animals and people, your dog's pancreatic tumor could be either benign (non-cancerous) or malignant (cancerous).

Sadly, in dogs malignant pancreatic tumors are more common than benign, however, both are relatively rare. The most common form of pancreatic cancer seen in dogs is insulinoma, followed by adenocarcinoma.

The different forms of pancreatic cancer in dogs will produce a host of different symptoms. If your dog is displaying any of the symptoms listed below it's important to get your pup to the vet for an examination as soon as possible.

Insulinoma tumors lead to the excessive production of insulin when there is no food in the stomach to trigger its normal release into the bloodstream. As a result of the unnecessary insulin, blood sugar levels are reduced and your pet will experience symptoms such as:

Because the early signs of adenocarcinomas in dogs are vague this form of pancreatic cancer is rarely diagnosed until the disease has progressed.

Symptoms of adenocarcinomas in dogs are much the same as the symptoms of pancreatitis (inflammation of the pancreas) and include:

If the cancer has spread to other areas of your dog's body (which is common with this form of cancer) you may notice symptoms such as breathing difficulties or lameness.

Pancreatic tumors can be challenging to diagnose. Besides being a relatively rare condition, the symptoms associated with these tumors often come and go. To further complicate the matter these symptoms are also indicative of other more common conditions in dogs.

When you take your dog in for an examination your vet will take the time to ask you questions about your pup's medical history and do a thorough physical examination.

If your vet suspects that your dog may have pancreatic cancer they may refer you to a Veterinary Oncologist for further testing and treatment or recommend one or more of the following diagnostic tests:

Pancreatic tumors commonly metastasize (spread to other parts of the body) before the disease is detected and diagnosed in dogs. For that reason, once pancreatic cancer has been diagnosed your vet may wish to do further tests to determine the extent of the disease, if the cancer has spread, and to where.

While it is common for pancreatic cancer in dogs to spread to the nearby liver or lymph nodes it could reach almost any part of the dog's body including the lungs, bone, or brain. In some cases fluid build-up can be seen in the chest or abdomen causing breathing problems or a swollen abdomen.

Tests that your vet may recommend to determine the 'stage' of your dog's cancer could include:

Progression of Pancreatic Cancer in Dogs

As well as the very real concern about the cancer spreading to other parts of your pup's body, there is the issue of damage to the pancreas caused by the growing tumor.

Treatment for Pancreatic Cancer in Dogs

In the case of insulinomas, surgery to remove the affected portion of the pancreas, followed by chemotherapy is typically considered the best treatment option. If surgery is not an option your vet may try to manage your dog's low blood sugar symptoms through a modified diet and feeding plan combined with medications to suppress insulin secretion.

Surgery is also considered to be the most effective treatment for adenocarcinomas although it does come with a very real risk of life-threatening complications. Your pup's surgeon or veterinary oncologist may remove part of the pancreas or all. In some cases a portion of the small intestine will also be removed. Chemotherapy tends not to be effective in the treatment of adenocarcinomas in dogs.

The Prognosis for Dogs with Pancreatic Cancer

Because pancreatic tumors tend to be malignant there is a high probability that the cancer has spread even before diagnosis has occurred, making the prognosis for dogs with pancreatic cancer poor.

Your vet or veterinary oncologist will be able to provide you with a prognosis for your dog based on the type of tumor and results from staging tests.

Note: The advice provided in this post is intended for informational purposes and does not constitute medical advice regarding pets. For an accurate diagnosis of your pet's condition, please make an appointment with your vet.

If your dog is showing symptoms of pancreatic cancer contact Animal Hospital of Clemmons right away to book an examination for your pup. Our skilled veterinarians have experience diagnosing and treating cancer in pets. 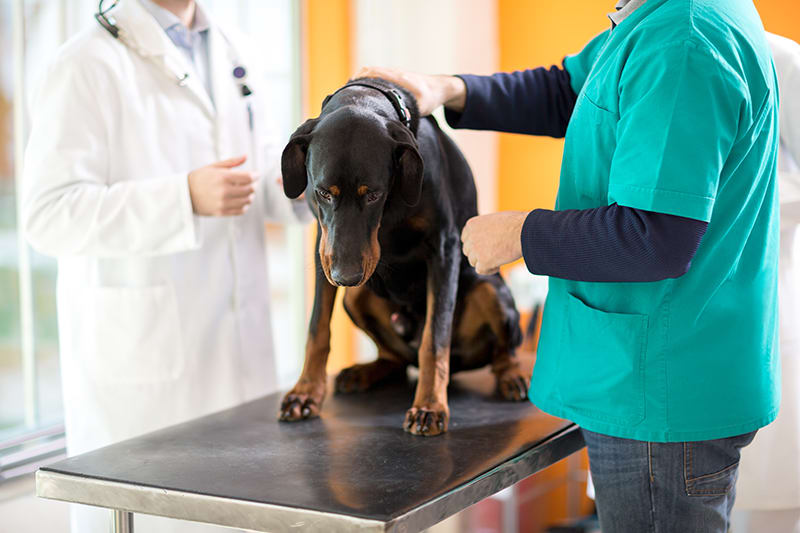 Looking for a vet in
Clemmons?

My Cat is Sleeping Constantly: Is this Cause for Worry?

Cats, without a doubt, enjoy sleeping. Concerned cat owners frequently ask our Clemmons veterinarians if they should be concerned that their cat sleeps so much. When does a cat nap signal the possibility of a medical emergency?

Is it safe for dogs to eat grass?

What To Do About Destructive Dog Chewing

Is your dog destroying your shoes, furniture, and other items with their destructive chewing? Here are some tips from our Clemmons vets to help curb your dog's chewing habit and save your precious belongings (and your sanity).

Dog Dental Care - Why It's Important

Much like our own oral health, a healthy mouth is an essential element of your dog's overall health. Unfortunately, our four-legged friends often don't get the dental care they need to stay optimally healthy. Here, our Clemmons vets explain why dental care for dogs is so important.

If your dog has chronic kidney disease or kidney failure, feeding them the right diet is going to play an essential role in their ongoing treatment. For dogs with kidney disease, our Clemmons vets may recommend a diet with restricted amounts of protein, phosphorus and sodium combined with increased levels of omega-3 fatty acids.

Looking for a vet in Clemmons? Get in touch today!

We are always thrilled to welcome new patients into our veterinary family, so contact our office today to book your first appointment with our team.